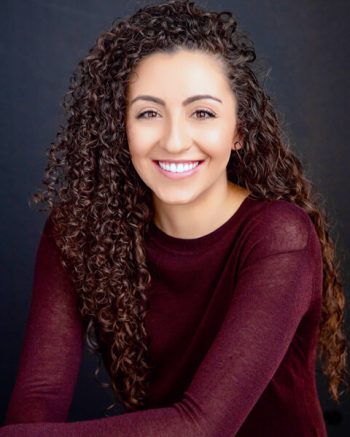 Melia Coury has been a student of Garth and Jan Williams since she was in high school. She was able to take some of their weekend intensive classes and always felt like she left with great notes. After graduating college she joined their week night classes for improvisation and some scene study. She is blessed to have them around to help her continue her growth.

At the ripe age of eighteen months, Melia Coury began her life as an actress in an ad for children’s clothing! You see one of her brother’s had joined Signature Models and Talent a few years prior. As the fourth child, Melia went everywhere with her mother and soon caught the eye of none other than Terri Hoffmann. The rest is history as Melia has been part of the Signature family ever since. Throughout her childhood Melia worked as talent for notable companies like Bounce, Shea Homes, Cox Communications, Dillards, and Peter Piper Pizza. Melia gravitated towards the acting life. Around the age of six after a half day shoot Melia expressed her sadness to her mother that she couldn’t continue acting on set and instead had to return to school. As an adult, Melia has done ad campaigns with billboards, commercials, and social media content for Casino Arizona, Cactus Jacks, WordPress, and FarCry 5. She also appeared in the Discovery ID show ‘Women in Prison.’

Acting wasn’t the only area Melia performed. At age five, Melia added dancing to her resume studying ballet, tap, jazz, hip-hop, modern, and eventually pointe. Now she’s had more than ten years of dancing experience in many of these disciplines. The culmination of her dance career, thus far, was in college when she received a grant to study dance ethnography in six countries across three continents. She journeyed to Japan, Indonesia, Myanmar (Burma), Croatia, England, and Brazil. Returning back to Arizona she taught six high school dance teams, a number from each country and used those as the base for a charity dance concert. A seventy plus page thesis of the findings and concert reflection can be found in the archives of Barrett, the Honors College at Arizona State University.

On the theatre side of the stage Melia has joined the cast of Scapin and Our Town (Mrs. Gibbs) while in school. Since then she’s enjoyed being a part of the Almost Famous Theatre Company (AFTC) productions of South Pacific (Liat), Always A Bridesmaid (Kari), Curtains (Bambi), The Drowsy Chaperone (Kitty), and Mamma Mia! (Aly). As the warmup act to the other shows produced by AFTC, she performs in the Almost Funny improv group. Melia has challenged herself with improvisation throughout the last six years and sees no end in sight.